Heritage Lodge is located at Habuharo Island, one of the 29 Islands of Lake Bunyonyi. Lake Bunyonyi is the world’s second deepest lake. It is renowned for its unrivalled beauty and tranquillity. A boat ride around the island brings to life its rich geographical, cultural and colonial history. Heritage Lodge has created a 2-night pocket-friendly package for East African residents, which runs as follows:

Guests arrive at landing site (15 minute drive from Kabale town) where they board the Heritage Lodge motorboat and ride for approximately 15mins to Habuharo Island. Guests check-in, settle down and have dinner and drinks at leisure from 6.30pm onwards

After a full English /Continental breakfast, guests are encouraged to participate in the Lodge’s on-going tree planting drive. After planting a tree, guests embark on a guided tour of the lake, a 2 to 3 hour experience with a couple of stop-overs at selected Islands. Drinks are available during the ride. A guide brings to life the stories of the Islands along the way. The tour includes a visit to the local communities, mainly the Batwa Community, to appreciate and learn about their way of life. Lunch is served on return to the lodge, after which guests spend a leisurely afternoon, either resting, swimming in the lake or simply spending time around the island or in the lounge. In the evening the guests enjoy a scrumptious barbeque dinner around a campfire, with a variety of drinks and great music.

Breakfast at leisure and thereafter guests depart for the landing.

The package costs $100= per person for a minimum of 8 persons per group. Safe car parking is available near the landing site where guests leave their cars for the weekend for a small fee.

For its size, approx 240,000 sq km, Uganda boasts more than any other country in Africa of her bird species. The current list has 1017 species and this figure constitutes more than 10% of the world’s species. Uganda has a great variety of habitats, including the Afro-Alpine, montane forest, savanna, low land forests, wetlands and dry and semi arid desert: with elevation between 600m – 5000m. All these habitats support their own unique bird communities.

In this post, we review the Black Heron, the Golden-backed weaver and the Cardinal Woodpecker. 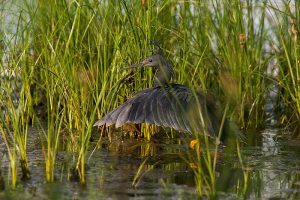 The Black Heron is a medium-sized (42.5–66 cm in height), black-plumaged heron with black bill, legs and yellow feet. In breeding plumage it grows long plumes on the crown and nape.

The Black Heron prefers shallow open waters, such as the edges of freshwater lakes and ponds. It may also be found in marshes, river edges, rice fields, and seasonally flooded grasslands. In coastal areas, it may be found feeding along tidal rivers and creeks, in alkaline lakes, and tidal flats.

The bird has an interesting hunting method called canopy feeding—it uses its wings like an umbrella, and uses the shade it creates to attract fish. This technique was well documented on episode 5 of the BBC’s The Life of Birds. Some have been observed feeding in solitary, while others feed in groups of up to 50 individuals, 200 being the highest number reported. The black heron feeds by day but especially prefers the time around sunset. It roosts communally at night, and coastal flocks roost at high tide. The primary food of the black heron are small fish, but it will also eat aquatic insects, crustaceans and amphibians.

The nest of the Black Heron is constructed of twigs placed over water in trees, bushes, and reed beds, forming a solid structure. The heron nests at the beginning of the rainy season, in single or mixed-species colonies that may number in the hundreds. The eggs are dark blue and the clutch is two to four eggs. 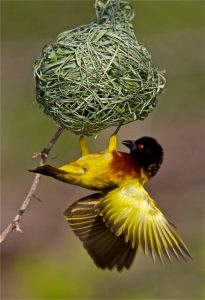 The Golden-backed Weaver is polygynous and colonial, often nesting alongside other weavers. Its nest is oval, compact, woven of strips torn from grass or palm leaves, lined with grass tops and some feathers. There is no entrance tunnel. It is built over water in papyrus or reeds; also in acacia trees, ambatch bushes and in maize fields. The song at its colony includes a variety of harsh notes. 2-3 eggs are laid, which are blue, with purple-brown or dark red spots. There are several records of brood parasitism by the Diederik Cuckoo. The Swamp Flycatcher uses old nests of this weaver to nest in.